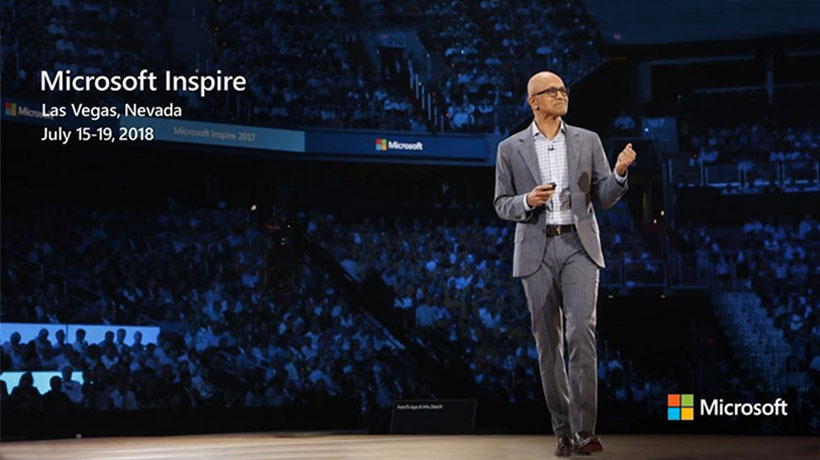 3 days of great inspirational things where thousands of partners came to Las Vegas to share the vision of Microsoft for the new fiscal year which is just started and it is announced as one of the most promising and innovative of all the times.

Microsoft CEO Satya Nadella took the stage at the Microsoft Inspire 2018 partner conference to an extended round of applause, before he’d even said a word.

The past year saw Microsoft prioritise the aligning of its sales teams with the needs of partners, with the result being a surge in growth. Executives shared estimates that partners generated nearly US$1 trillion in revenue over the past 12 months through working with Microsoft solutions.

But that’s just the start!

Nadella said during his Inspire keynote.

he told the 16,000 partners gathered at the conference in Las Vegas

I’ve lived through the client-server, the web, mobile, cloud. But what we’re going to see going forward is going to be even more profound.

What follows are five key topics discussed by Nadella during his keynote at Microsoft Inspire 2018.

Future of Microsoft is to grow with the partners in the new era of the intelligent cloud and the intelligent edge. Infusing everything with AI and leveraging on a powerful cloud computing platform such as azure

Microsoft’s vision for this sort of computing fabric starts with the Azure cloud platform, which now has 54 data center regions (and recently expanded to its first underwater data center).

We are very, very excited about questioning the conventional wisdom of what is a data center,

Of course, computing needs will go far beyond the data center. Essentially, wherever there is data, compute will migrate to data. And so we are going and taking Azure to Azure Stack, to Azure IoT Edge, to Azure Sphere. This is that one ubiquitous, distributed computing fabric. One programming model that is event-driven, serverless, so you can write an application that truly works across all of this.

During his Inspire keynote, Nadella placed a special focus on artificial intelligence technologies. Recent advances in AI have been “pretty stunning” in terms of how they’re reaching parity with human perception and language capabilities, he said. However,

Nadella dedicated a portion of his keynote to demonstrating the way his own workday revolves around the Microsoft 365 suite, which includes Office 365 productivity apps and Windows 10. Along with using Outlook.

Dynamics 365 — Microsoft’s combination cloud CRM and ERP system — saw 65 percent growth during the first three quarters of the company’s fiscal 2018. That makes it one of Microsoft’s fastest-growing businesses, even faster than Office 365. Microsoft executives announced a number of new ways they’re working to assist partners with getting involved with Dynamics 365, as well as with other business applications such as Power BI data visualization. During his Inspire keynote, Nadella said that Power BI is “one tool that’s changed the culture inside the company,” thanks to the way that it helps bring the focus to leading indicators rather than lagging indicators.

That means we need to have a set of tools that allow us to reduce the total cost of these customizations and automation. And now we’ve built a complete new app Platform — Power BI, PowerApps and Flow –, which I think represents a tremendous opportunity for everyone in the room. The combination of it is just going to change how applications are built and deployed.

Relive the most interesting moments of  Microsoft Inspire 2018.

See you next year in Las Vegas for Microsoft Inspire 19.

Want to join the discussion?
Feel free to contribute!

Porini and Technology Excellence announce a distributorship agreement for the... Scroll to top

We may request cookies to be set on your device. We use cookies to let us know when you visit our websites, how you interact with us, to enrich your user experience, and to customize your relationship with our website.

Click on the different category headings to find out more. You can also change some of your preferences. Note that blocking some types of cookies may impact your experience on our websites and the services we are able to offer.

These cookies are strictly necessary to provide you with services available through our website and to use some of its features.

Because these cookies are strictly necessary to deliver the website, refuseing them will have impact how our site functions. You always can block or delete cookies by changing your browser settings and force blocking all cookies on this website. But this will always prompt you to accept/refuse cookies when revisiting our site.

We fully respect if you want to refuse cookies but to avoid asking you again and again kindly allow us to store a cookie for that. You are free to opt out any time or opt in for other cookies to get a better experience. If you refuse cookies we will remove all set cookies in our domain.

We provide you with a list of stored cookies on your computer in our domain so you can check what we stored. Due to security reasons we are not able to show or modify cookies from other domains. You can check these in your browser security settings.

These cookies collect information that is used either in aggregate form to help us understand how our website is being used or how effective our marketing campaigns are, or to help us customize our website and application for you in order to enhance your experience.

If you do not want that we track your visit to our site you can disable tracking in your browser here:

We also use different external services like Google Webfonts, Google Maps, and external Video providers. Since these providers may collect personal data like your IP address we allow you to block them here. Please be aware that this might heavily reduce the functionality and appearance of our site. Changes will take effect once you reload the page.

The following cookies are also needed - You can choose if you want to allow them: